October 1950 saw an official decision to expand Tychy, and, a month later, it was given a city charter01. Prior to the commencement of the great construction, the population of Tychy was less than 13 thousand. Under the six-year plan, implemented in the years 1950-1955, its population was to reach 30,000. In the following years, this number was to rise further and reach 100,000. The young city, later named New Tychy02, was intended to take over some 'central functions for the Central Coal Basin in order to relieve the administrative burden on Katowice'03. It was also expected to be a housing base for the employees of the southern part of the Upper Silesian Industrial Region (Górnośląski Okręg Przemysłowy - GOP). The propaganda image of Nowe Tychy was that of a city of youth, a younger sister of Nowa Huta, and a city without history. Such an image, despite the old Tychy settlement, which had existed for centuries, became established in the public perception of Tychy for many years. Władysław Bochenek was in the first wave of new settlers of the emerging city, later called pioneers. In his poem "My City" published in the regional weekly "Echo" in 1957 he wrote:

01 In 1934-1945, Tychy was a rural commune with municipal rights, and after World War II, Tychy had its incomplete municipal rights revoked. 02 The name 'New Tychy' has never been officially introduced, but it has become widespread among society. Its counterbalance was Stare Tychy - the oldest part of the city prior to the expansion. 03 „Uchwała Prezydium Rządu z dnia 4 października 1950 roku w sprawie rozbudowy m. Tychy”, Monitor Polski, 16.10.1950 r.
04 Echo Weekly No. 20, 1957.

Bochenek was delighted with the young city, which welcomed new residents arriving by train with a large welcome gate bearing the inscription "NEW TYCHY" (the first housing estate of Nowe Tychy was built in the vicinity of the old Tychy railway station). The gate is long gone, but it still remains in the memory of the oldest Nowe Tychy residents. Bogdan Ostromęcki wrote about it in 1952: "Over the main entrance there is a high, soaring gate. On its wide pediment, rows of electric lamps shining like stars form two words "NOWE TYCHY"05. It was immortalised in a seconds-long scene in the 1961 documentary "Miasto bez dymu" [A City without Smoke]06. There seems to be, therefore, hardly any need to explain the historical importance of an image recorded on cine or photographic film.
So, what image of Nowe Tychy was recorded in the photographs from the collection gathered by the Tychy City Museum?
They are unique images from the construction of the city, which also captured the reality of everyday life, socio-cultural life, and also the religious sphere. In addition to the buildings, initially erected using traditional masonry and then prefabricated systems, the photographs also feature the builders of the big city. Zygmunt Kubski, one of the photographers, professionally associated with the company Zjednoczenie Budownictwa Miejskiego - Nowe Tychy [Municipal Construction Group – Nowe Tychy] (the company changed its name several times, the last one used until the company's dissolution was Kombinat Budownictwa Ogólnego GOP "Południe" [General Construction Combine GOP-South] ), paid special attention to them. 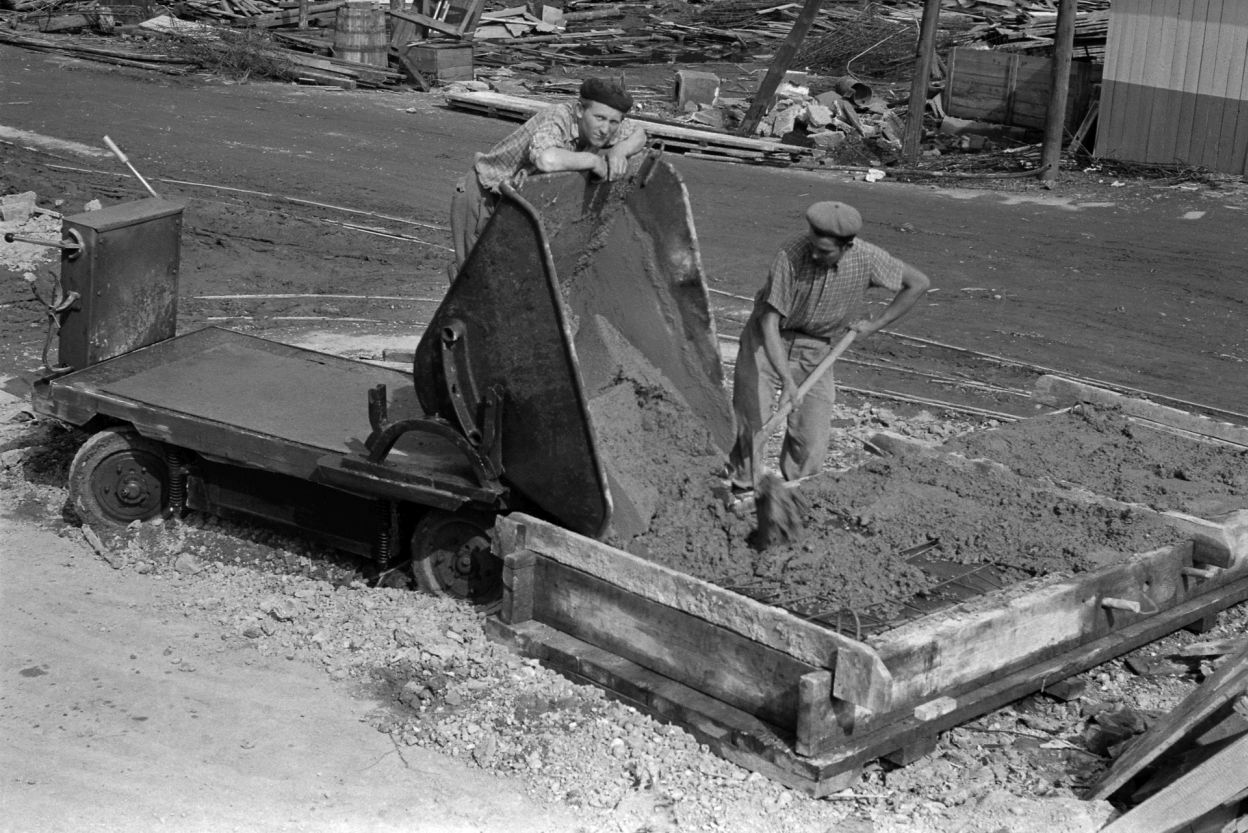 A barracks town was built for the city builders, which can be found in the photographs taken by the above mentioned Zygmunt Kubski, and Stanisław Kasperowicz, who was also professionally involved in the local construction trade. Their photographs perfectly documented the early period of the city's construction. The barracks town was bustling with life. It even had its own newsletter "Builder of Nowe Tychy" and a small cinema (where theatre performances were also held). Many of the builders made Tychy their home, moving from the barracks to a newly built flats and starting their own families. Nowe Tychy provided a fully modern infrastructure, and its favourable location by a fragment of the former Pszczyna Forest, untouched by mining works, made for a perfect place to live. 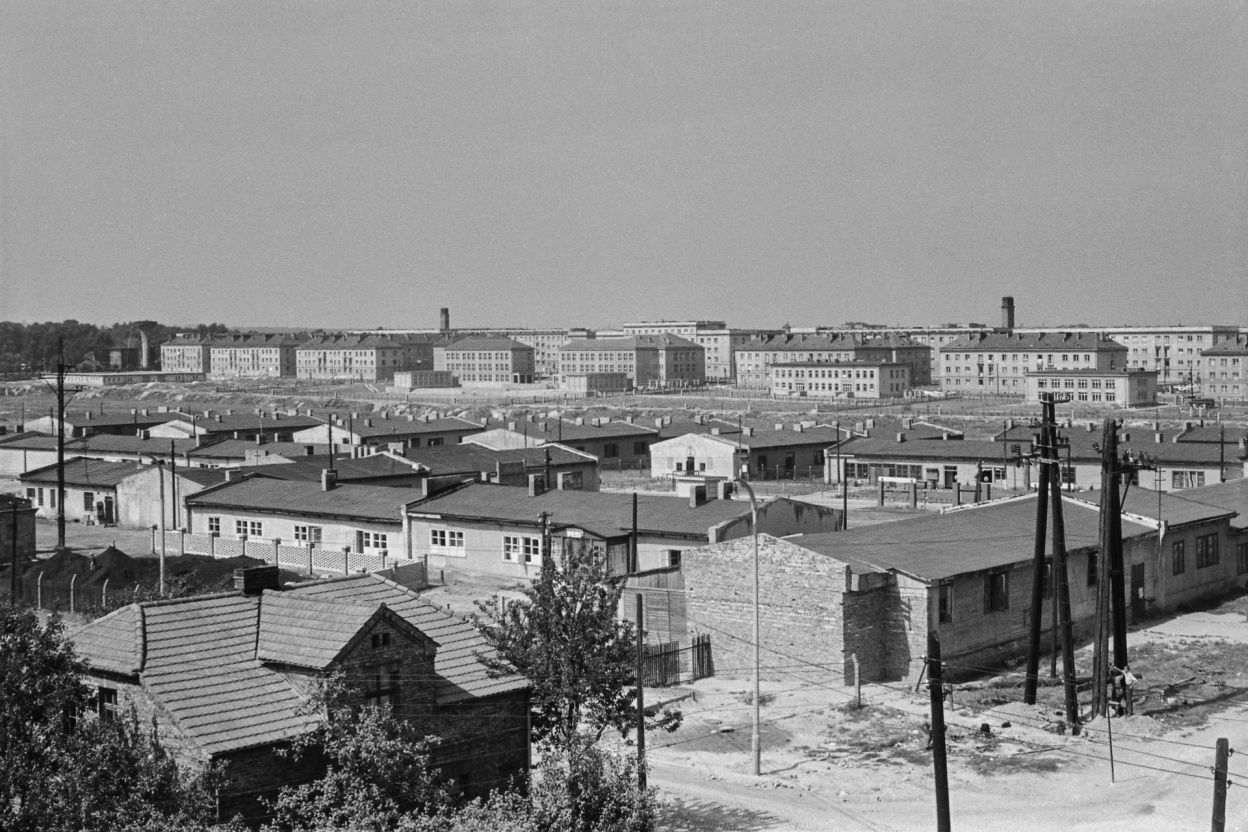 Barracks town with Housing Estate A in the background, ca. 1956 , photo by Zygmunt Kubski

The photographs from the Tychy City Museum's collection show residents during leisurely strolls, on their way to work, at May Day parades, during sports events at the Tychy Stadium, and returning from church after Sunday mass. The photographers captured important popular local venues, such as the cinemas, the theatre, restaurants and cafes.
The latter, no longer existing, arouse great sentiment among the Tychy residents. One of the most frequented restaurants was Józefinka Café, which was also photographed by Zygmunt Kubski. A wide selection of treats, as well as modern décor and good location made this establishment very popular in the 1960s. Above the entrance to the café there was a neon sign with the name and image of a cup of coffee. 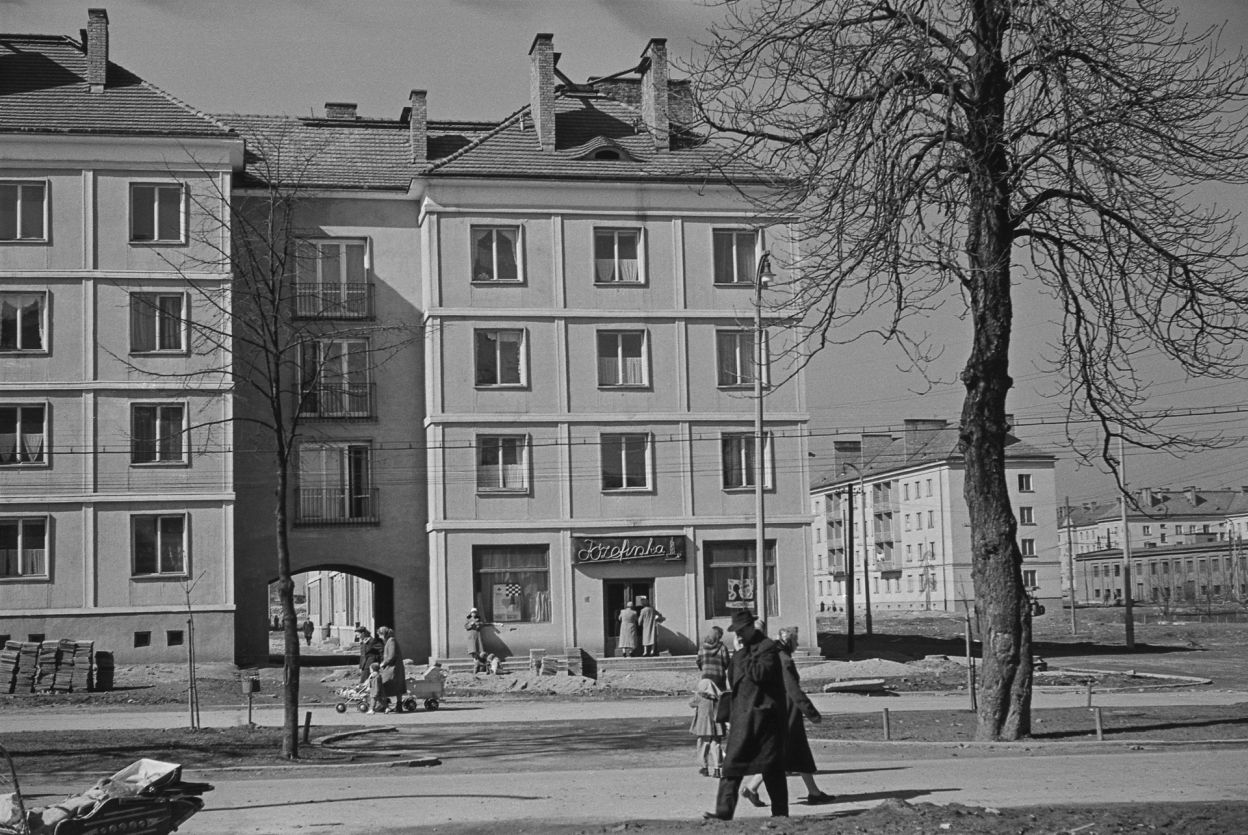 Thanks to the photographs by Stanisław Kasperowicz, we can peep inside another culinary establishment, namely Mimoza Café, located in Bieruta Square (now Baczyńskiego Square), in the vicinity of a restaurant of the same name. The interior of the café with a metalwork decoration featuring a dragonfly, now-iconic Chierowski armchairs and a classic coffee maker, reflect the atmosphere of those years. 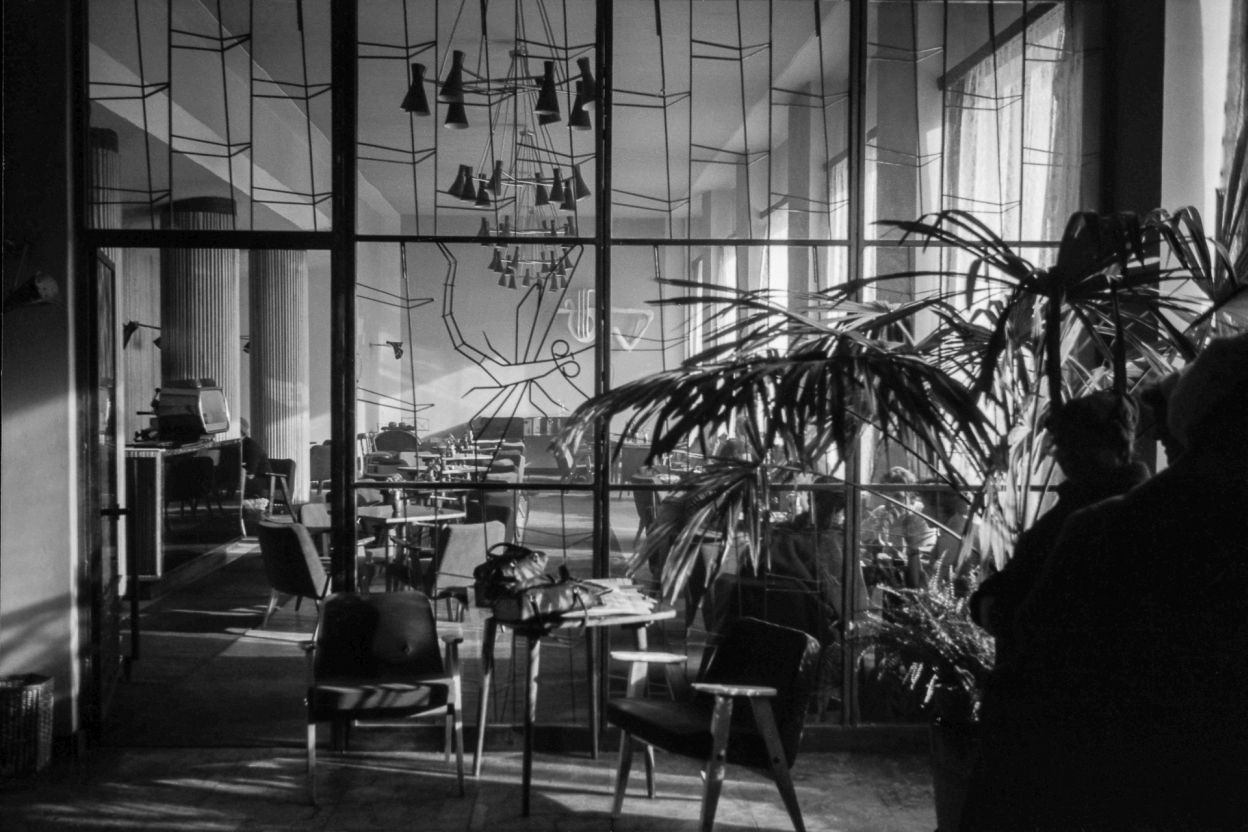 Mimoza Café interior, the turn of the 1950s and 1960s, photo by Stanisław Kasperowicz

The café was often visited after film screenings at the next-door Andromeda cinema. The cinema can be found, among others, in the photos by Ireneusz Kaźmierczak. They also show the PKO bank mosaic, which was located on one of the corner buildings in Bieruta Square. 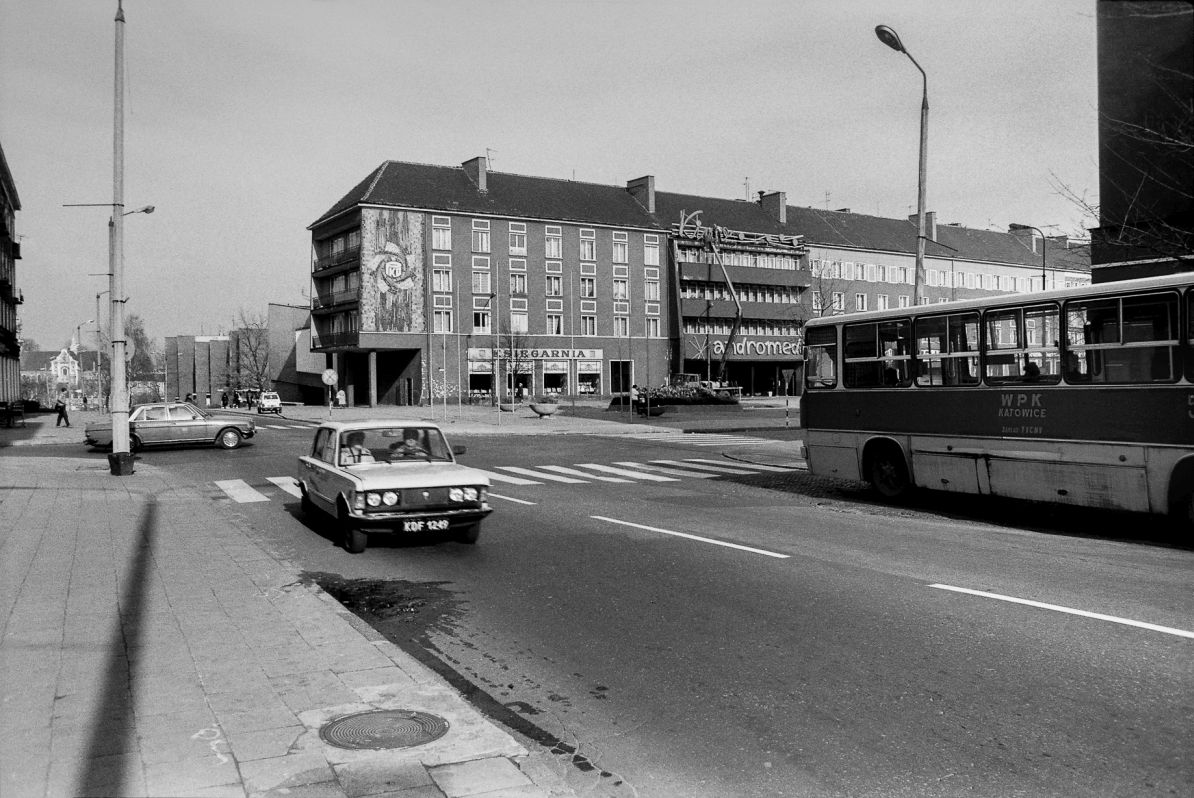 Tychy mosaics can also be found in photographs by Zygmunt Kubski. These mosaics, which no longer exist, include Tychy’s coat of arms07 on the city hall building and the Olympic symbol inside the swimming pool in Primary Sports School No. 19, as well as one of the few that have survived to our times: the mosaic on the façade of the Teatr Mały building, depicting Tychy’s cityscape.

07 The area of the shield was filled with a red brick wall pattern, with the hammer and pick symbol in the top right corner. This coat of arms represented the work of Tychy residents in mining and construction. Poland’s political transformation made it possible to return to the old coat of arms featuring a golden hunting horn with black hardware in a blue field, hung on a golden strap twisted into a loop at the top. 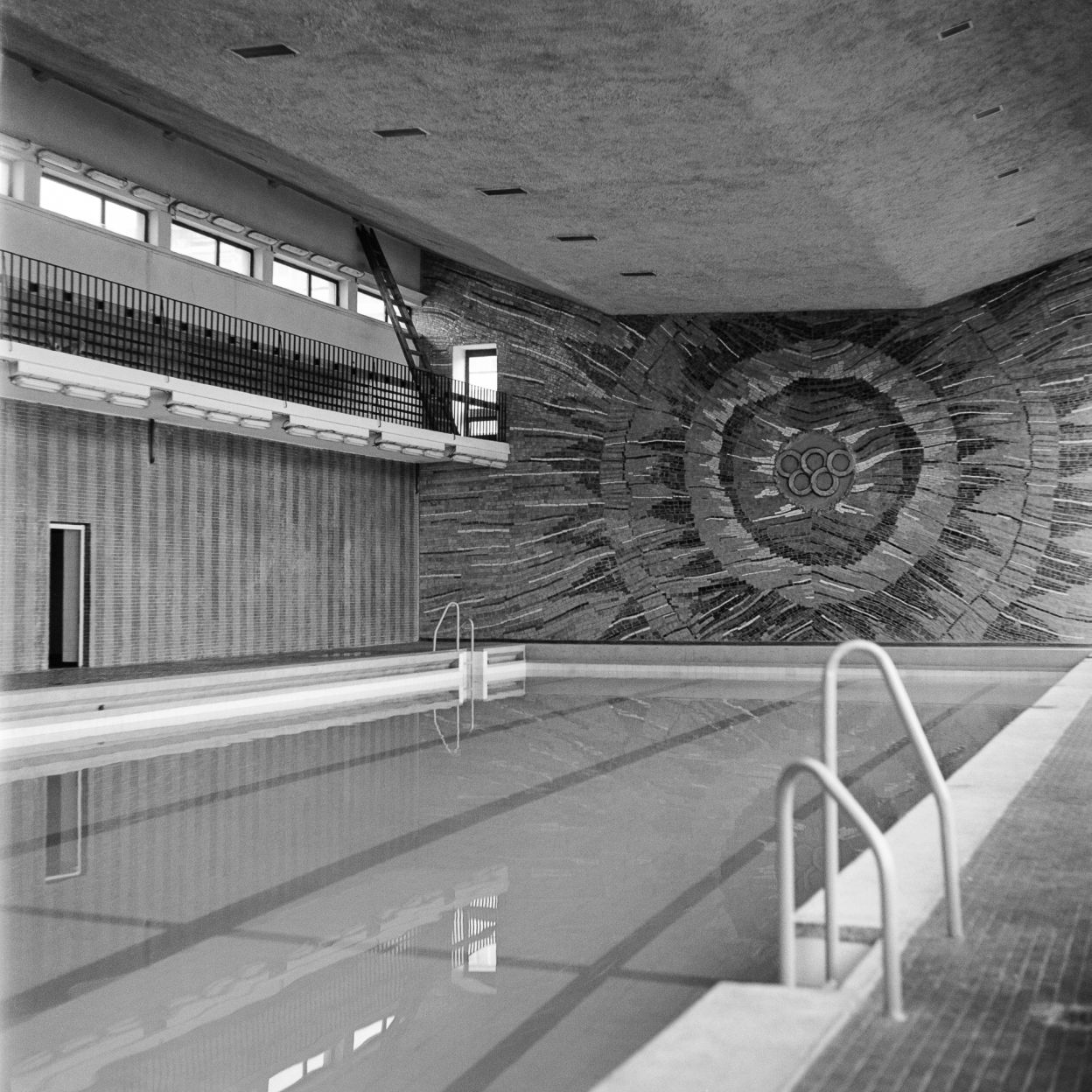 Mosaic at the swimming pool in the sports school, 1970s, photo by Zygmunt Kubski. 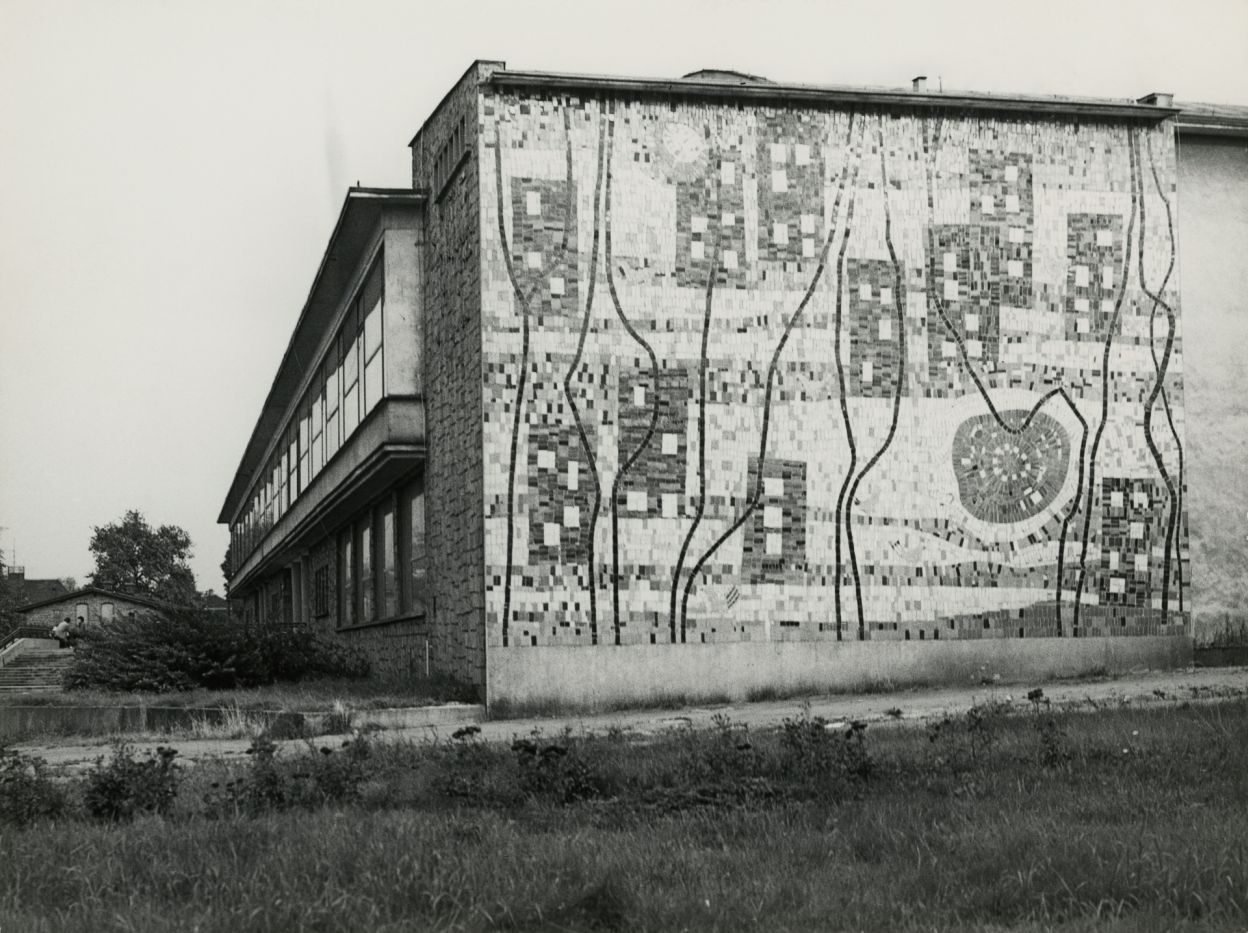 Mosaic on the side elevation of the Teatr Mały theatre, 1960s, photo: Zygmunt Kubski.

Nowe Tychy was located in the vicinity and partially within the area of the old Tychy settlement, which was presented in propaganda as "a feudal town in the shadow of the church tower and the chimneys of a once famous brewery"08. However, Stare Tychy overshadowed the newly built city in terms of religious facilities, as the designs failed to address the spiritual needs of its residents. During the initial years of construction, the 18th-century Church of St. Mary Magdalene was the only temple for those living in the first housing estates of Nowe Tychy.
In one of the photographs by architect Andrzej Czyżewski, who designed and co-created many buildings in the city, we can see the old church with a high tower in the background, with local residents gathered in Bieruta Square in the foreground taking their time to talk. 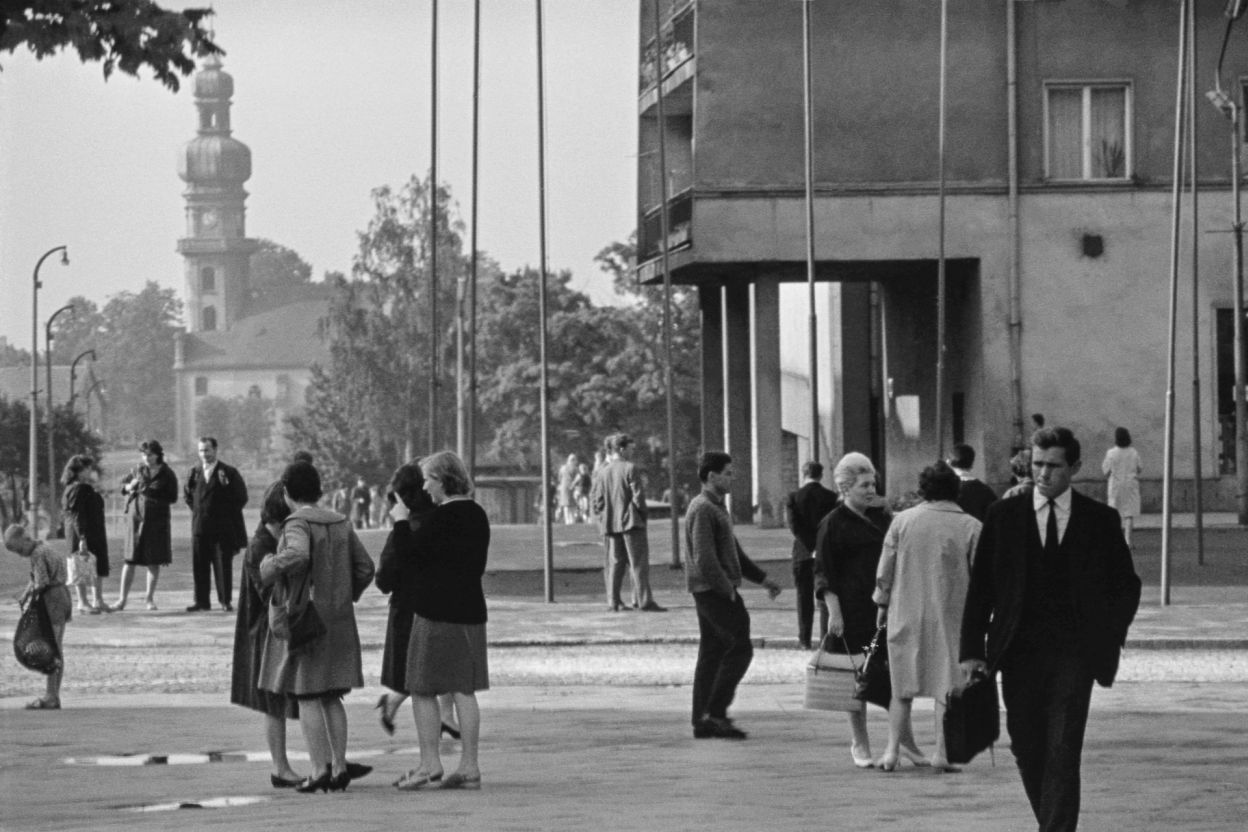 In 1958 a new church of St. John the Baptist was consecrated after a troubled construction process with many obstacles from the then authorities. It is shown in the photos by, among others, Marek Nowicki, a cinematographer who visited Tychy during the filming of footage for the Polish Film Chronicle, most likely in 1960. His work reflects the austere character of the temple at the time. It is worth mentioning that to many residents, the painting of Christ Crucified over the altar by architect Zbigniew Weber was of special significance. According to the interpretations of some parishioners, it was to reflect their hard work and dedication to the construction of the temple. 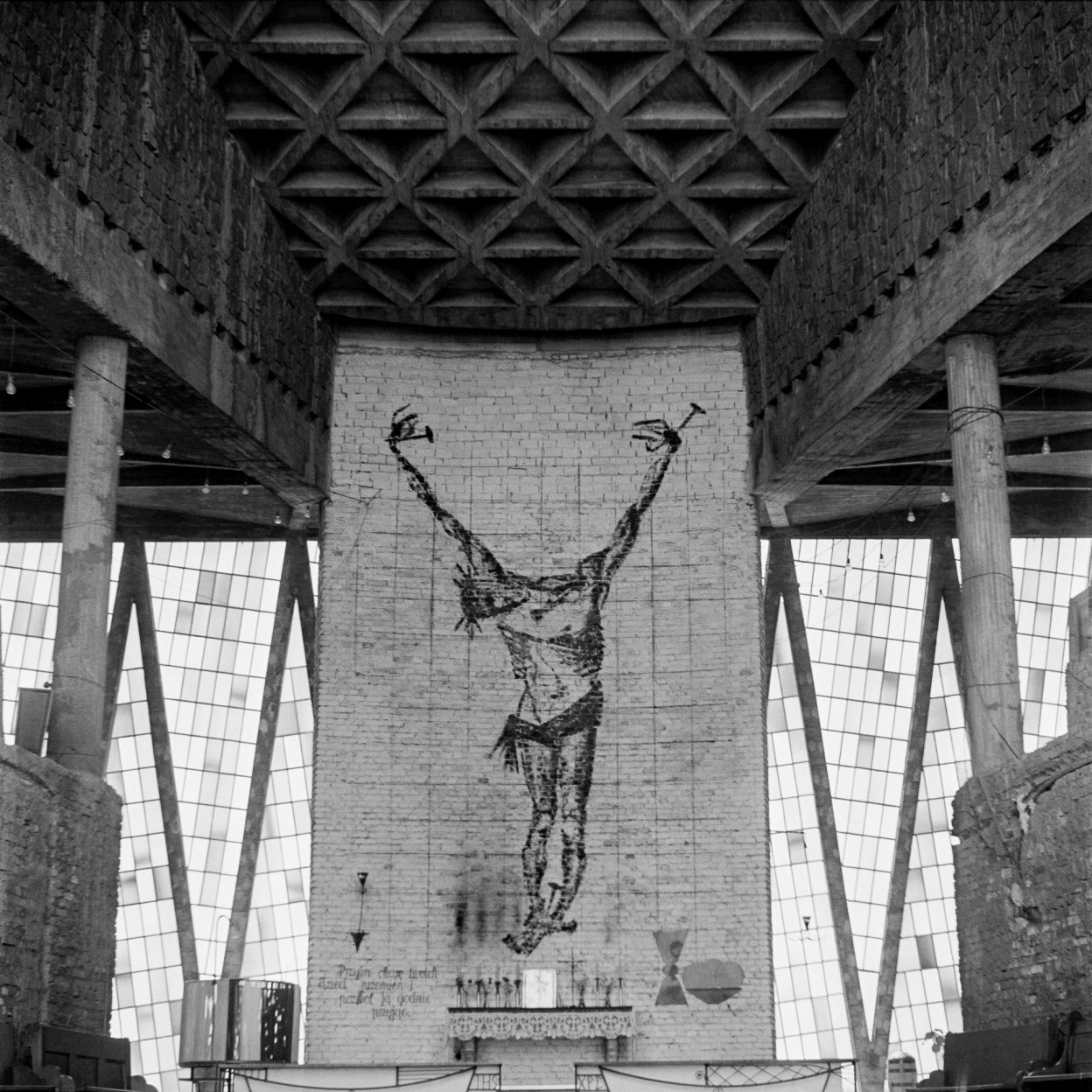 On the other hand, Andrzej Czyżewski's photographs, taken shortly after the church was built, show local residents coming back from Sunday mass in their Sunday clothes. An observant viewer will notice among the congregation a woman wearing a long black dress and a white headscarf, a costume she most likely had brought with her from the former Eastern Borderlands.
Nowe Tychy was a real social and cultural melting pot. The hope of being able to get a flat quickly attracted young Poles from all over the country. 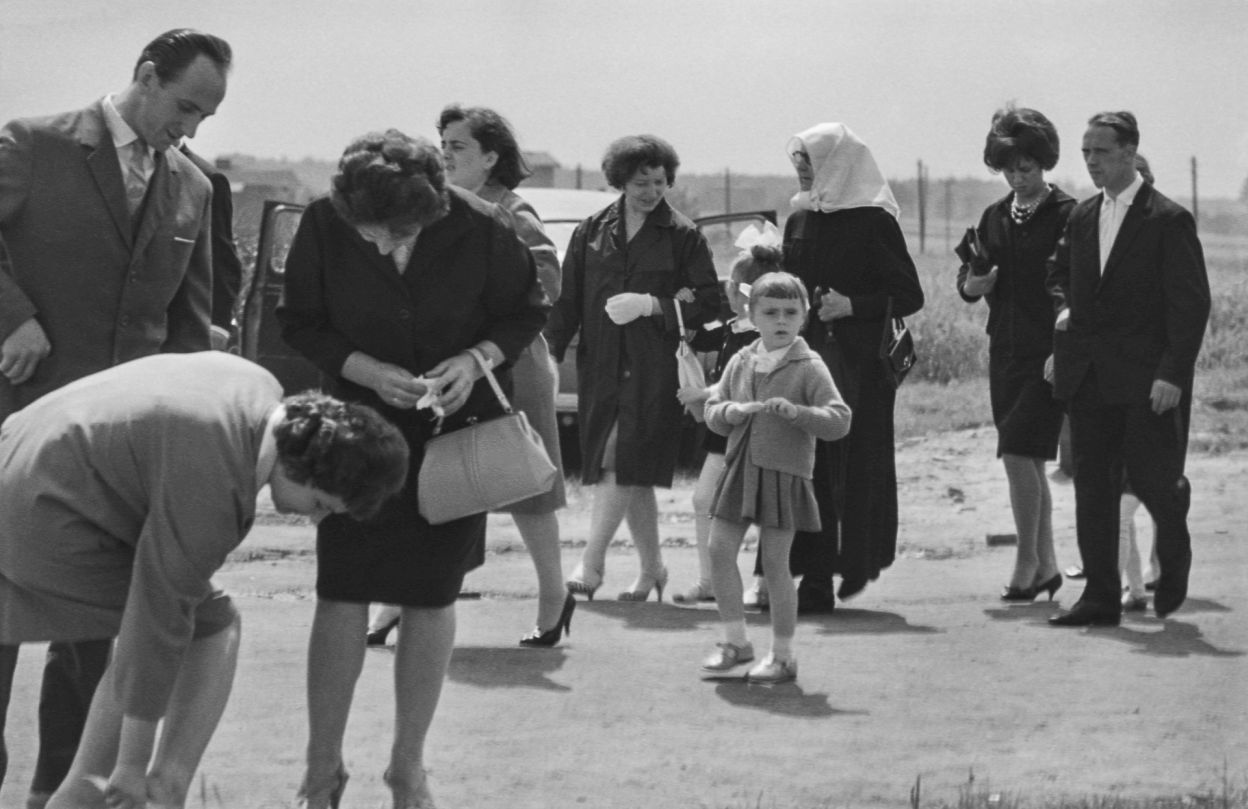 A woman from the Eastern Borderlands in a black dress and with a white headscarf among local residents, 1965, photo by Andrzej Czyżewski.

It seems hardly necessary, therefore, to explain how important the spaces reserved for socio-cultural life were in Tychy's architectural projects. The Andromeda cinema, the Teatr Mały theatre, restaurants and cafés, as well as the public green areas, were designed to bring together the Tychy community, also in terms of relations between the newcomers and the natives. We can see Tychy residents in the photographs by i.a. Ireneusz Kaźmierczak.
The May Day celebrations and the annual local event known as the Tychy Youth Encounters in Bieruta Square, sports events at the Tychy Stadium and Lake Paprocany, the amusement park in the vicinity of Housing Estate N, community festivals in Housing Estate M and in Paprocany - all these pictures show the local community. Photographs of children taken by Andrzej Czyżewski also have a special dimension in this respect. The architect recorded small children playing at an abandoned concrete mixer and in puddles after the rain, students in front of a local school, laundry drying on the balconies.... Tychy was popularly called the city of youth and the city of children. For these youngest inhabitants, all social animosities, often rooted in the families' background and status, were irrelevant. The estate's courtyard and school, as well as the construction sites, were places where social divisions disappeared into the background. The radiance of Andrzej Czyżewski's photographs reflects the spirit and atmosphere of those years. 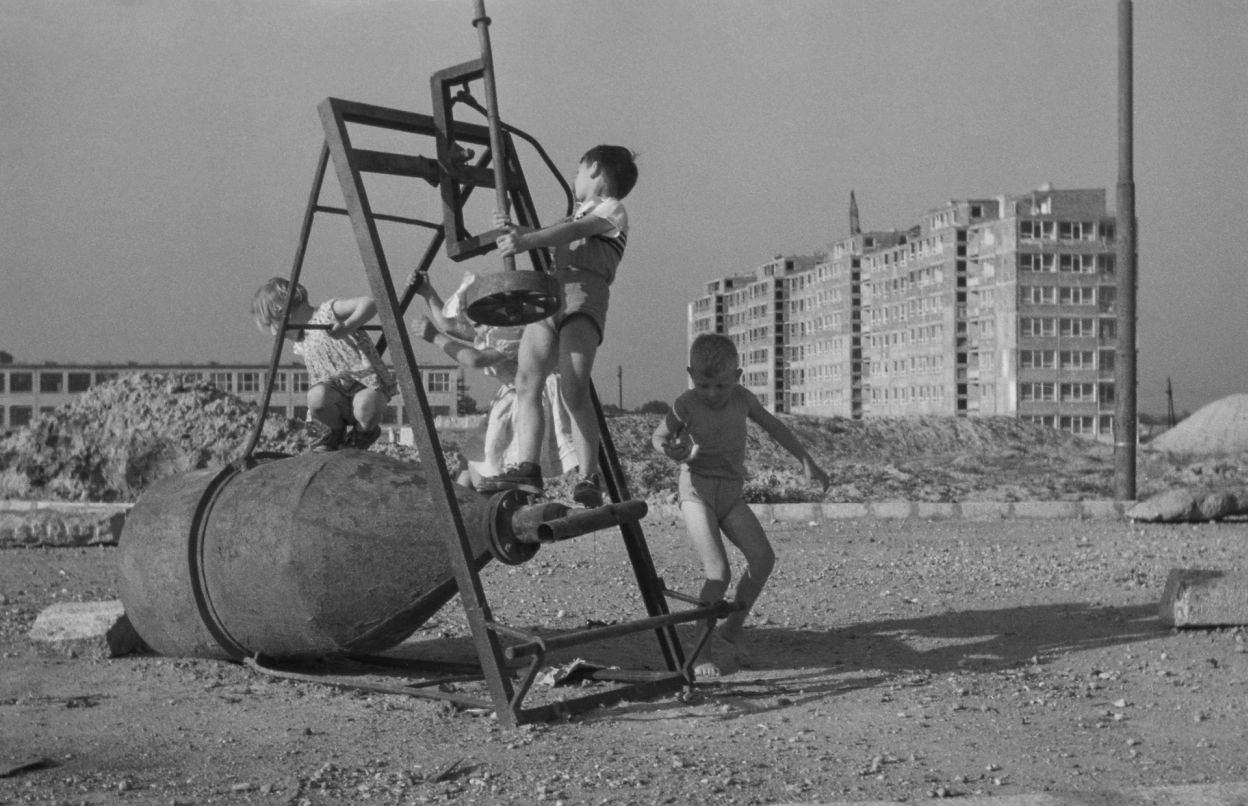 Children playing at a concrete mixer, 1961, photo by Andrzej Czyżewski.

Each and every photo from the Tychy City Museum's collection deserves a separate article, as each one is unique and has an interesting history behind it. Just like the one captured by Zygmunt Kubski of a man and a woman on a motorcycle. The author of this essay managed to contact the woman in the picture, who gave an account of the story behind it. This is Helena Janowiak, who, along with husband Józef, worked at the Tychy Municipal Construction Company. The picture is most likely to have been taken in 1956 at the time when new flats in Housing Estate B were just being handed over. It so happened that one of the flats had some sanitation facilities missing, and the photo shows Helena and Józef riding a motorcycle through the streets of Tychy, with big smiles on their faces and the missing piece of toilet hardware. 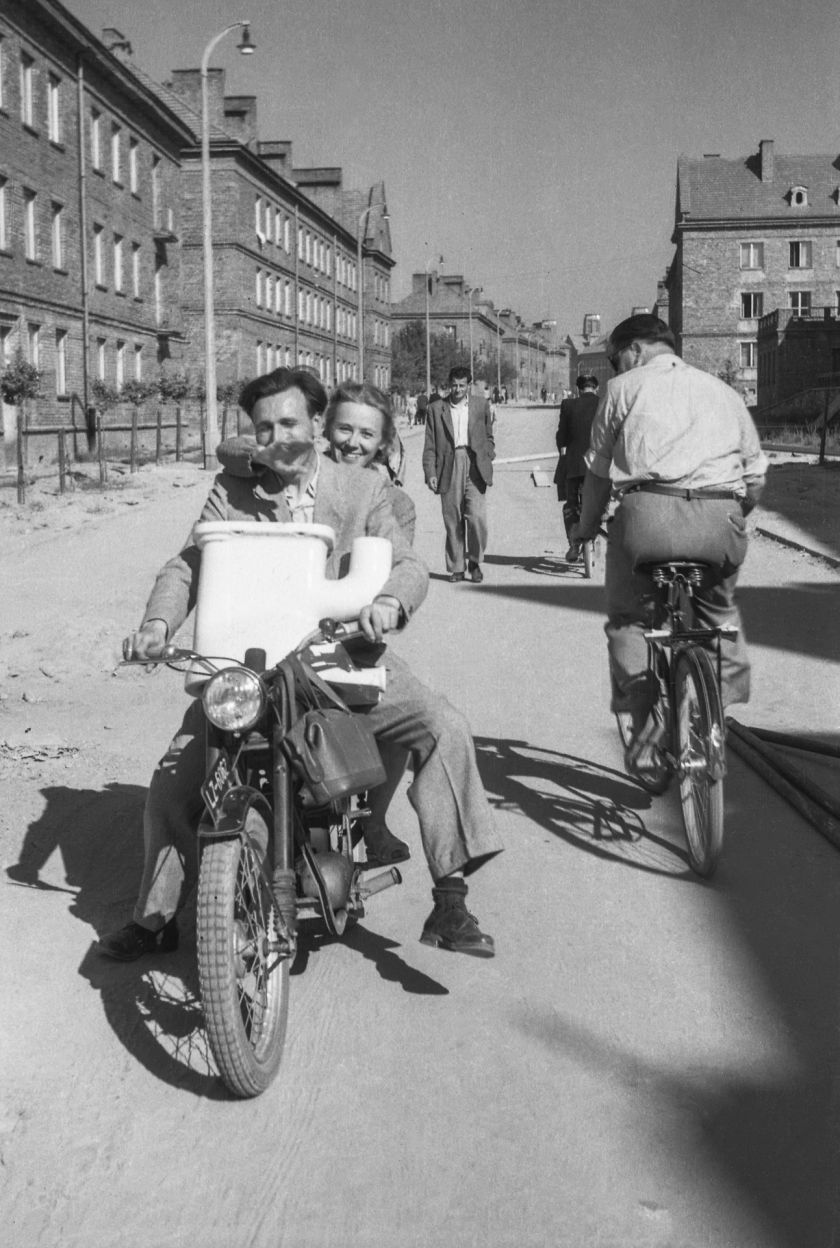 The collection of photographs of Nowe Tychy from the time of the city's construction is nothing short of priceless. Although the authors of the photographs took them for different purposes, at different times and from different perspectives, they are an excellent source material for researching the history of the city and its residents. For those who grew up in the city under construction, they are a perfect occasion for reflection, reminiscing and a sentimental journey down the memory lane. For the younger generation, they provide an excellent basis for exploring the city through its architecture, buildings and not too distant history.